Penny Mickelbury Oct 22, 2021 Penny Mickelbury
We live in a youth-oriented culture, and nobody knows that better than a 50-something year old woman looking for love. Despite the commercials featuring grey-haired characters, film and television still cast 30-year old women as the love interests of 60-year old men...and 60-year old women are hard to find on television-- unless a witch or a bag lady is called for. So, many 50-something women looking for what they see as a last chance at love have taken to the internet. And if she is from a small town, is financially secure and a bit adventurous and willing to re-locate, that love is waiting for her in Washington, D.C.! Or is it? Lured not really to D.C. but to its Maryland and Virginia suburbs, and then to the lesbian bars where they are total strangers, the lonely, confused women do what lonely, confused people everywhere do: Talk to the bartender. But unlike bartenders everywhere else, the lesbian behind the bar is likely to notice the newly-arrived stranger--and to notice when she vanishes. And when it happens more than once, the bartender will alert her friend Lt. Gianna Maglione, head of the D.C. Police Department's Hate Crimes Unit. Missing lesbians? Investigative newspaper reporter Mimi Patterson hears the same story from friends, but more than a story about missing lesbians--who happen to be very well-to-do and professionally accomplished--Mimi senses another story: What's wrong with our culture that we so easily side-line any woman over 50? And, Mimi wants to know, what's wrong with smart, talented over-50 women that they'd put themselves in danger for one last chance at love? 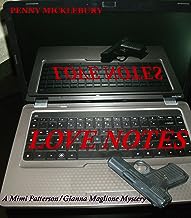